Cryptocurrency exchange Coinbase will provide UK tax authorities with data on its customers who have received crypto assets worth over £ 5,000 over the past year.

According to an email from Coinbase, the exchange will forward its UK customer data to the UK’s Royal Revenue and Customs Service (HMRC). At the same time, information will be transferred only about those customers who have purchased or deposited cryptoassets worth more than £ 5,000 (about $ 6,474) into their Coinbase account in the last year.

HMRC originally required Coinbase to provide certain UK customer records to the exchange between 2017 and 2019. However, after discussions with the tax authority, the requirement was changed, and now it only affects some users of the platform. The letter from Coinbase notes:

“Following further discussions with HMRC, an amended notice has been issued that requires disclosure of UK citizens who have received over £ 5,000 in crypto assets from the Coinbase platform during 2019/2020. This includes both purchases and credits of cryptoassets to your Coinbase account. “ 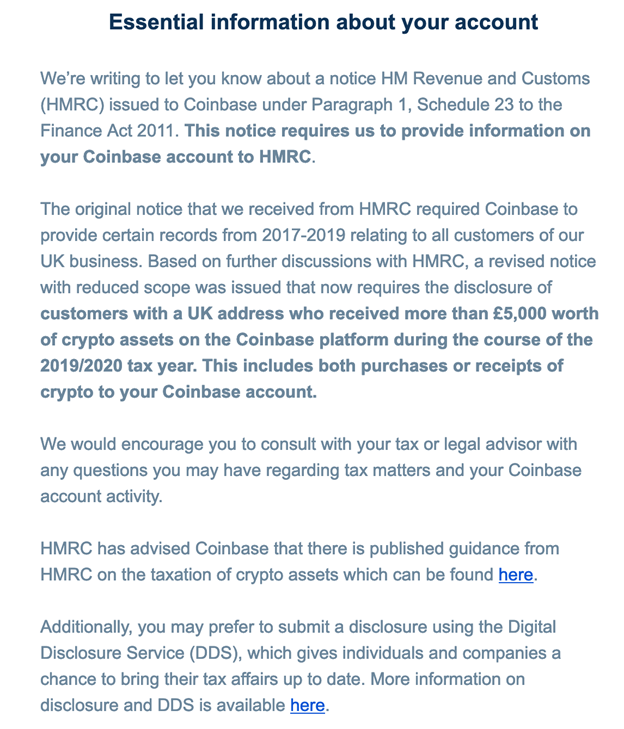 Last year, HMRC sent out emails requesting customer lists and transaction information to at least three exchanges doing business in the UK – Coinbase, eToro and CEX.IO. Apparently, Coinbase was able, through negotiations with HMRC, to reduce the amount of information provided to the tax authority, and to limit itself to customers who received large amounts of cryptocurrencies.

UK citizens are required to pay Capital Gains Tax on cryptocurrency income. Any information that HMRC receives is likely to be used to verify the accuracy of individuals’ tax records. Recall that last year, the UK Internal Revenue Service exempted cryptoassets from stamp duties.