Ethereum user activity is growing rapidly – on July 25, the number of daily calls to smart contracts reached a record high and exceeded 3.1 million.

According to CoinMetrics, on July 25, more than 3.1 million calls to Ethereum smart contracts were made, which was a new record for this indicator of network activity. A call to a smart contract is an action when a user requests a specific function from a smart contract, which, unlike a transaction, does not result in a record on the blockchain.

According to CoinMetrics, record user engagement for Ethereum is associated with the Decentralized Finance (DeFi) industry, which has more than quadrupled in a year. A week ago, the volume of crypto assets blocked in DeFi applications reached $ 3 billion, and a few days later exceeded $ 4 billion. 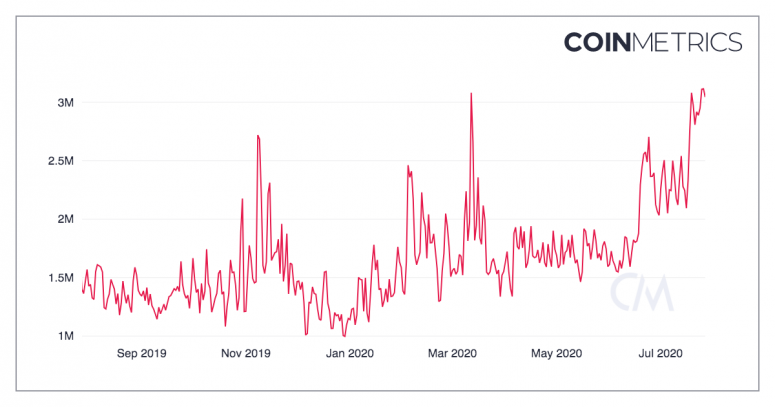 The number of daily calls to Ethereum smart contracts over the past year. Source: CoinMetrics.

CoinMetrics analysts excluded from statistics the abnormal network activity caused by a DDoS attack in 2016, when the daily number of calls to smart contracts increased from 30,000 to 40 million.