The price of the YFI token for managing the DeFi protocol yEarn has grown by 15% per day and by 1,900% per month, and now stands at $ 14,641. What caused the explosive growth and what danger does it pose for investors?

The boom in Decentralized Finance (DeFi) is one of the main trends in the cryptocurrency industry this year. In July, the volume of cryptoassets blocked in DeFi applications for the first time reached $ 3 billion, and in mid-August this figure doubled and exceeded $ 6 billion.

Some analysts speculate that this increase in volume is due to the rise in the price of cryptoassets involved in the operation of the protocols. Many DeFi projects have issued their own protocol management tokens, and their price is skyrocketing in parallel with the growing interest in the industry.

The YFI token for managing the DeFi protocol yEarn.finance has been attracting the most community attention in recent weeks. According to CoinMarketCap , YFI is currently trading at $ 14,641, showing an increase of 15% over the past 24 hours and 1,900% in thirty days.

A few days ago, the YFI token became “more expensive than bitcoin”, which generated unhealthy hype in some media. In reality, this price can be easily explained – the maximum number of YFI tokens provided by the protocol is only 30,000, that is, 700 times less than the maximum possible amount of BTC.

And yet, the rise in the price of YFI is striking and reminds of the beginning of the ICO boom in 2017, when unknown tokens rose in price tens and hundreds of times in a few days or weeks. According to CoinGecko , as early as July 18, the token price was $ 31.65. YFI soared above $ 1,000 the day after launch and was worth $ 4,000 by early August. To date, YFI’s market capitalization has exceeded $ 438 million and has brought the token to the 40th place in the list of the largest cryptocurrencies.

At the same time, the developers of the project were not involved in inflating the stock market bubble. On the contrary, three days after the launch of the token, they stated that it has no financial value and is solely for the management of the protocol:

“The token is intended to control the platform. If you’re not interested in managing the platform, stay away from it. “

As for the platform itself, yEarn.finance, according to the information on the official website , is “a yield aggregator for lending platforms that rebalances for maximum profitability while interacting with the contract.” In other words, this project is an aggregator of loans from other platforms. Even in the case of successful development, its financial model is unlikely to justify the half-billion capitalization of the management token, which actually does not bring any income.

The yEarn protocol supports DAI, USDC, USDT, TUSD, and sUSD. After users transfer cryptoassets to platform contract addresses, they are converted into local tokens, which are then used in other services that provide interest income on deposits.

Despite the fact that the project belongs to the industry of decentralized finance, the YFI bubble is being inflated by traders on centralized exchanges, the largest volumes are traded on Binance. According to CoinMarketCap, the daily trading volume of the YFI / USDT pair on Binance was $ 64,277,496. At the same time, for the YFI / BTC pair on Binance, the trading volume for the past day was $ 42,557,173. The total daily token turnover is approaching $ 200 million, of which just over 10 % falls on decentralized exchanges. 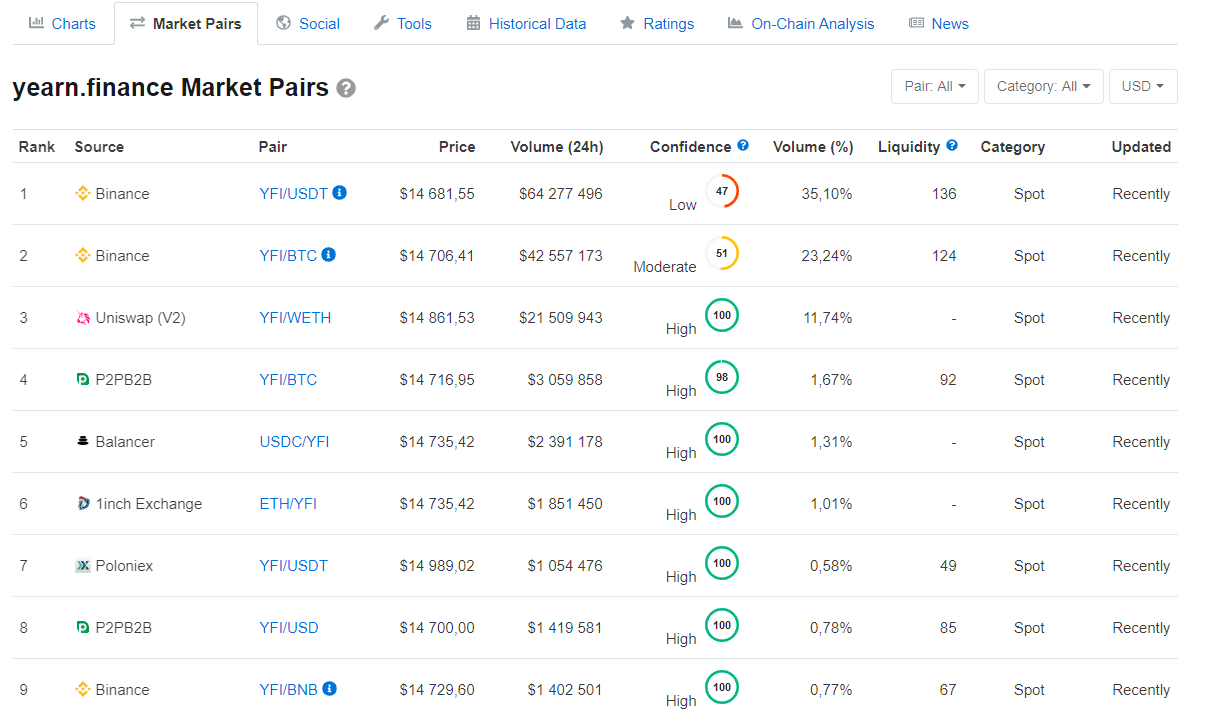 Taking into account the current situation and the characteristics of the project, the fate of the bubble in the YFI token is quite predictable – it will inevitably burst in the near future and can cause serious damage to the users who have invested in it. However, traders continue to buy the token in the confidence that soon its price will equal not one, but two BTC.

For a booming industry like DeFi, bubbles and major project failures are inevitable. Recall that last week, the DeFi YAM project, which raised $ 76 million in the sale of tokens, announced its closure due to a critical error in the code.

The inevitable deflation of the bubble in the YFI token will not lead to the collapse of the project itself. Its smart contracts work quite reliably so far, although many features are still in the testing phase. However, the cost of the management token is artificially inflated and is supported only by exchange speculation.